Q: What was your introduction to rugby?

A: I was living in Holland Park in Brisbane, just a couple of kilometres from Souths (junior) Rugby Club. The only options back then were rugby league and rugby union and I played both until about Year 12. I was really enjoying my rugby and I saw a bit more in it and I love to travel, so that was it.

Q: At what stage did you think you could go the next level?

A: Probably around the time I was 18, 19. I was getting selected in Queensland teams and first XVs (at Brisbane State High) and I thought I might give this rugby stuff a crack.

Q: At 19 you get called up to the Queensland Reds squad. That must have been a huge thrill?

A: It was. Myself and Brian Smith went to school together and played club rugby together and we were both going for that halfback spot. The previous two halfbacks had just retired so the timing was pretty good.

Q: You made the No.9 position your own and went on to earn 109 caps for Queensland, placing you in esteemed company.

A: I'm pretty proud of that. We don’t play as many games as the guys do now so it took 10 years to reach that mark. I felt so lucky to play for Queensland. It was a wonderful lifestyle back then. We weren't getting paid but we used to travel a lot. We'd go to Argentina for a month and then come back and go to the Pacific Islands… travelling and playing footy with your mates. Unreal. 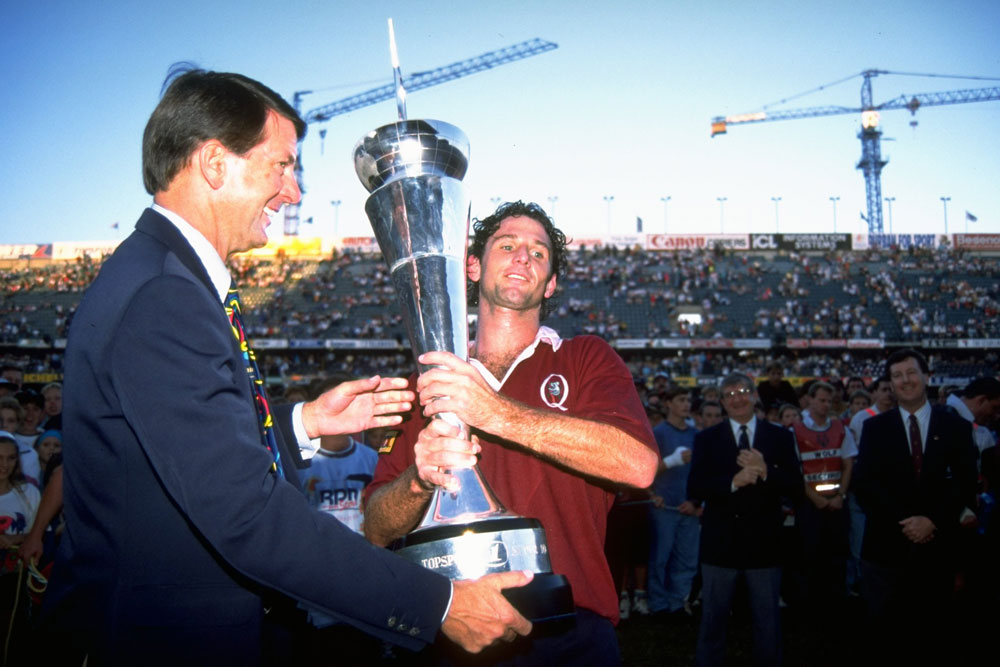 A: I was captain for both and what a great side we had. We beat Natal in Durban and Transvaal in Johannesburg the next year. To win both finals away is phenomenal.

Q: You were picked in the Australian squad in 1985 but had to wait five years to make your debut. What happened?

A: I think there were only two Tests that year and Brian Smith got picked ahead of me. I then got injured and drifted away a bit. My debut was off the bench against America at Ballymore (in 1990). I scored a try but there wasn't much to it. I was at the back of the ruck and picked the ball up and scored.

Q: You played 17 Tests, seven off the bench. Was it frustrating not starting?

A: I wasn't expecting to play much back then. The player on the field had to be diagnosed near death before being replaced. I didn't enjoy being on the bench – I don't think anyone would – but I still had a role to play and was part of the squad. And it wasn't like I was being kept out by average players. First there was Nick Farr-Jones and later on George Gregan. But because we travelled so much I probably played 50 tour games for Australia, so it's not like I wasn't playing at all.

Q: It's a remarkable stat -  you only lost one of the 17 Tests you played in?

A: I felt lucky to be playing in an era where we were successful – both the Wallabies and Queensland. Some of the all-time greats played in those sides.

Q: One of your more memorable appearances from the bench came in the 1991 World Cup quarter-final against Ireland. What happened there? 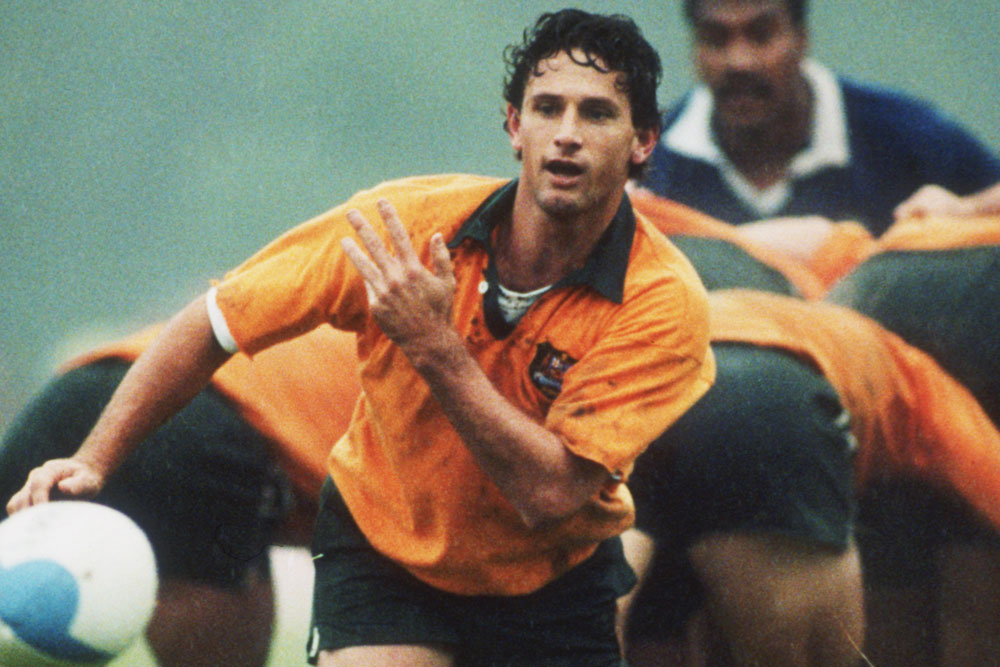 A: Nick got injured in the pool game against Samoa, so I came on for him and then played a full game against the Welsh in Cardiff. Nick came back against Ireland but got injured again. I played a lot of that game (62 minutes) and it’s a game a lot of people remember. That would have been a nightmare if we'd lost it. We were based in Dublin and having so much fun. We were two minutes away from being sent home before that late try (gave Australia a 19-18 win).

Q: Onto the World Cup final and you watch from the bench at Twickenham as Australia hold on for a tense 12-6 win...

A: It wasn't a dominant performance and pretty close all the way through, so everyone was on edge for the whole 80 minutes. There was a lot of relief and a lot of beers drunk in the sheds after the game.  We were a really happy team. We were playing good footy and winning games and having a great time socially. It was a great time to be an Australian rugby player and an Australian rugby supporter.

Q: Four years later you are at your second World Cup, this time in South Africa. But the mood could not have been any different? 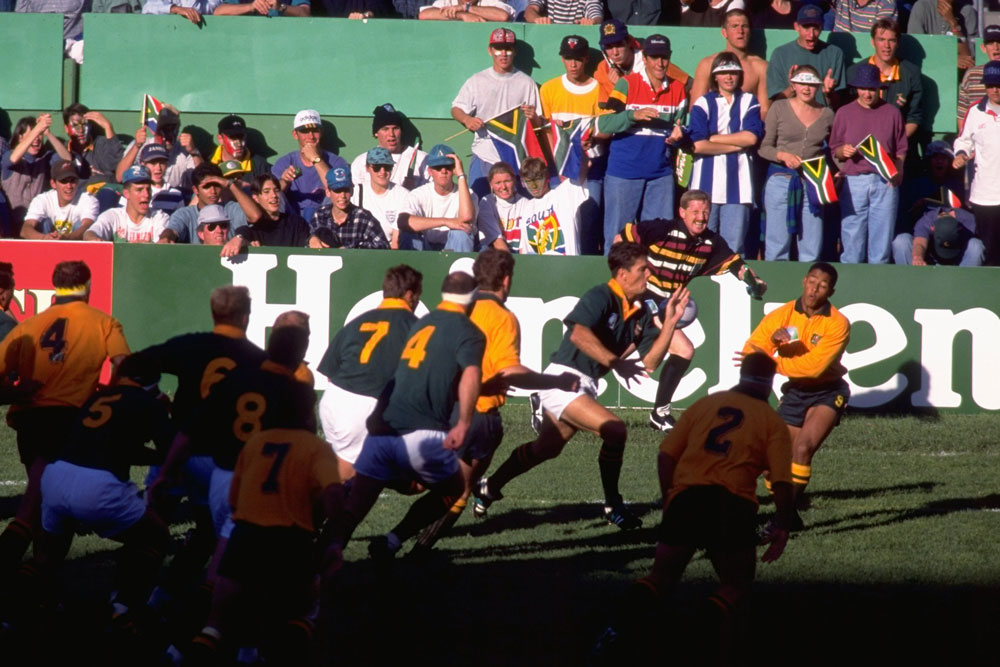 A: You're right. It was the complete opposite to '91. South Africa is a wonderful place to go for rugby but we weren't playing well. I remember losing the quarter-final and we were sent home and we are waiting for a flight from Perth to Sydney and here are all these supporters groups going the other way to South Africa to watch a team that's no longer in the tournament. It wasn't a great memory for us but what a great moment it was for South Africa as a country

Q: You played with and against some of the world's best players. Who stood out?

A: Michael Lynagh. I played 99 per cent of my footy with him. He was a great reader of a game, great attacker and a wonderful defender. Campo was the other. He did things only he was capable of.

Q: You finished in rep rugby at the end of 1995 and then came a move to Sydney and a surprise grand final win at club level?

A: I got a job with the ARU at their office in North Sydney. I thought to myself 'where’s the nearest beach to North Sydney?' and it was Manly. I just went down to the club to have a run around for fun and we ended up winning the (Shute Shield in 1997). I really enjoyed my time there. Not a bad spot to live and play rugby and a tremendous bunch of blokes. I then went to Japan and played and coached over there for four years

Q: So what are you up to these days?

A: I'm married with one son and living up at Coolum on the Sunshine Coast. Don't tell my wife but I am semi-retired these days. I just finished a research masters before Christmas – one under a PHD – so I'm waiting on the results from that. I work as a volunteer at the C2K Rugby Academy. It's position-specific stuff for young players, coached by ex-Wallabies and professional players. Life is good. I can’t complain

Classic Wallabies: Where are they now - Phil Cox

Classic Wallabies - Where are they now: Brett Papworth