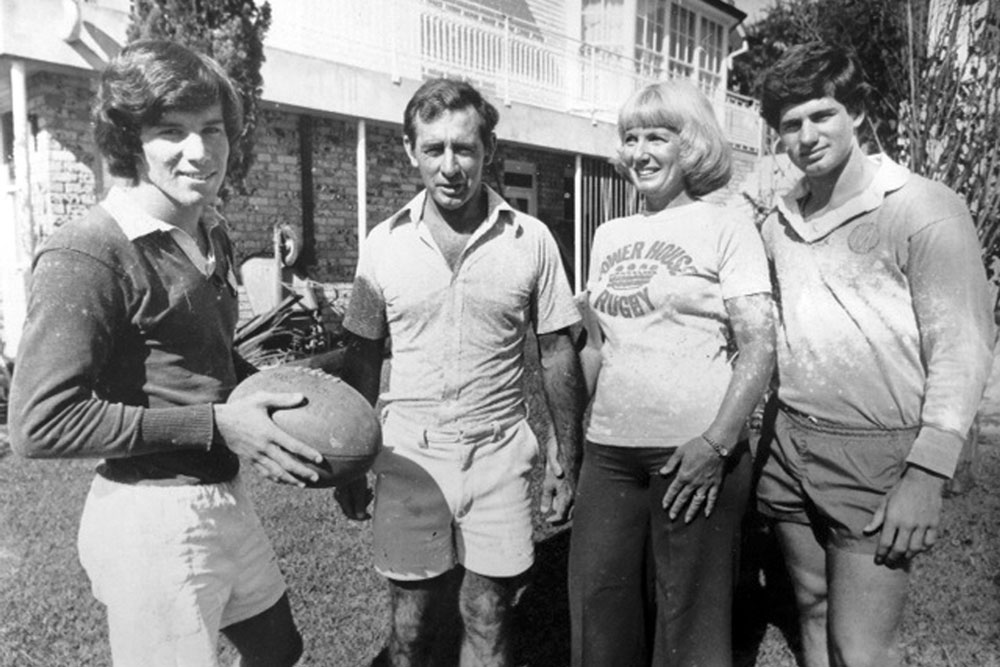 A: With Dad (Brian) being an ex-Wallaby we (Phil and brother Mitchell) were introduced to rugby early. We'd put his old jerseys on – a Fijian jumper, an All Blacks jersey or an old South African jumper he'd swapped with the opposition - and play on the front yard, which we called Cardiff Arms Park. Our cousins Andrew and Adam Hill would join in and there'd be plenty of conflict on that lawn. We were about five or six. They were fun times.

Q: Do you remember your first official game?

A: I do. We played for Balgowlah Heights (on Sydney's northern beaches) but didn’t really love it at first. Mitchell was a year younger than me but we ended up playing together in our first trial game and he got a bleeding nose after being hit. We both decided we didn't like the game and didn't play again that season. We came back the following year.

Q: And a few years later things take off for both of you? 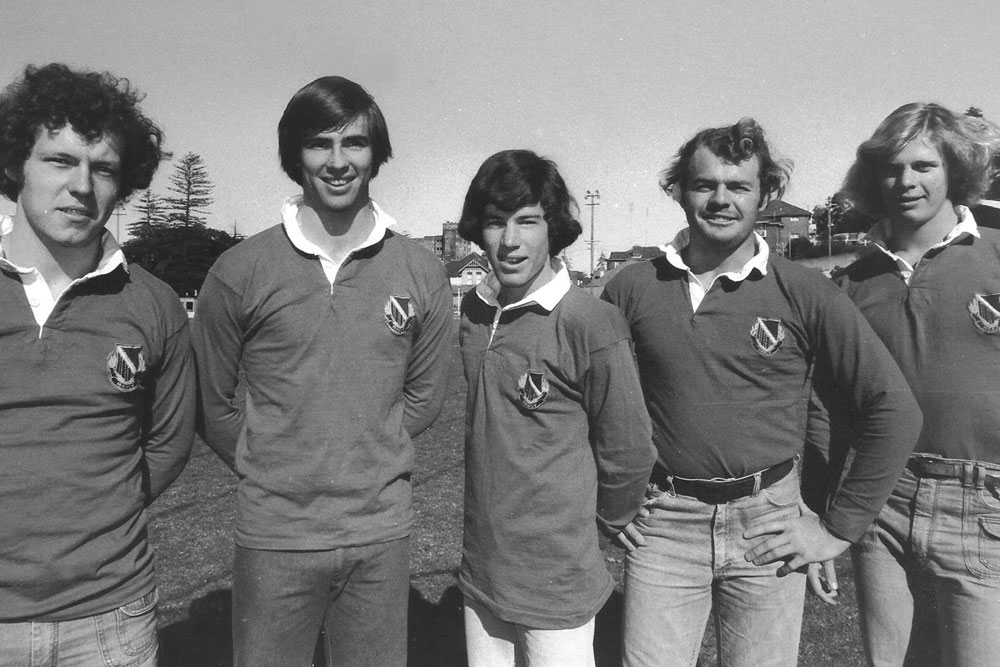 A: Mitchell and I matured late so it wasn't until later on that we started to make our mark. We could handle the size – we learnt very early how to tackle around the legs – but it probably wasn't until we joined Manly Colts in 76-77 that things really kick-started. We won the Colts comp undefeated in 77 and went to grade the next year. I went straight into first grade and Mitchell joined me after two or three matches. With him at five-eighth and me at half, it just clicked.

Q: And from there the rep selectors quickly began to take notice of you?

A: I got picked in a few Sydney sides and some Possible v Probables games and eventually got picked for Australia without playing for NSW. They wouldn't pick me for NSW – "Carso" (Peter Carson) was their number one. Anyway, we had a Possible-Probables game at Concord Oval at the end of the season (1979) to pick the team to go to Argentina. Johnny Hipwell had retired so there were four of us (halfbacks) going for two spots. I didn’t think there was any chance of me going but at the end of the game they read the team out in alphabetical order. They read out Carson…Coolican… Cornelsen…then finally Cox was read out. Dad was there so it was pretty special. It was a proud moment knowing I'd done something my father had done. I was in shock but excited. We all went back to Manly Rugby Club and celebrated.

Q: So you go to Argentina as the back-up to Peter Carson but end up making your debut in the first Test after he pulls out with SUNBURN? Please tell me this story is true 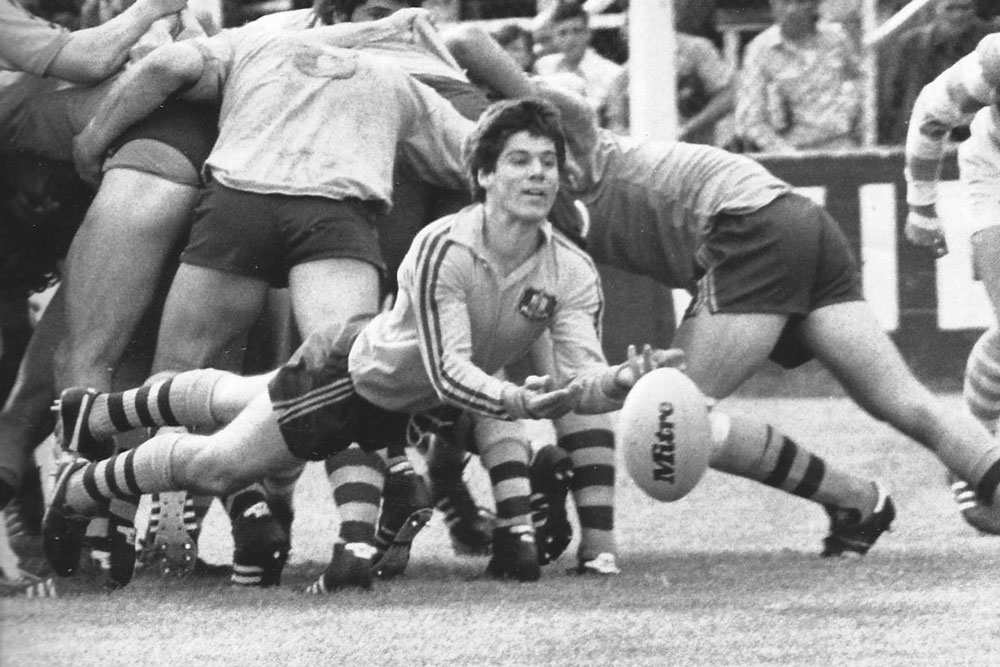 A: It's absolutely true! It was after training in Rosario and a few of the boys decided to have a swim and a sunbake by the pool. Carso, being of fair skin, ended up getting so sunburnt he couldn't train the next day. I ended up getting the chance to play the Saturday tour game before the first Test. I got the jump on him, scored a try and impressed the selectors and got picked for the Test. We lost the first Test after under-estimating their forwards. They had a great scrum – Topo Rodriguez was playing for them – and terrific set piece along with Hugo Porta's kicking.  We adjusted our tactics in the second Test and won that game. It was a tremendous tour.

Q: And there was a slight detour after that tour?

A: Manly were having their end-of-season tour to Hawaii so I asked the (Australian) manager if it was alright to be dropped off in Los Angeles so I could fly to Hawaii. It wasn't a problem. I spent two months there and played with Mitchell and a couple of others for the Hawaiian Harlequins. I then returned home for the 1980 season.

Q: That 1980 season was bittersweet for you?

Q: There was a tour to Fiji first and I played a Test match there. I then got picked for the first two Tests against the (touring) All Blacks and got dropped to reserve for the third Test because I had a shit of a game in the second Test in Brisbane. Brisbane was just horrible but at least I was part of a Bledisloe Cup-winning series.

Q: The following year you hear your old nemesis John Hipwell is coming out of retirement and is again eyeing a Test jumper?

A: There was a tour to the British Isles and they felt they didn't have a strong halfback, so Hippy came back. I didn’t feel put out. He was the best halfback I saw. France came over and Hippy played the two Tests and I was reserve. They picked the team for the British Isles at the end of the year and Hippy was in it but Carso and I weren't. They went for Tony Parker (from Queensland) as his back-up.

Q:  History was made so this story has a happy ending?

A: It does. I got an early call-up because Hippy got injured. I got my first (tour) game at Twickenham straight after getting off the plane and ended up staying the whole tour. Hippy got injured against Wales and I came on and Mitchell (normally a five-eighth or centre) was on the wing for some reason. Mum (Judy) and Dad followed that tour so it was pretty special moment having us both out at Cardiff Arms Park. From our front yard Cardiff Arms Park to the real one. We also played with each other against Scotland.

Q: And all along Mitchell had kept a BIG secret from you?

A: He did (laughs). He'd already signed with the (North Sydney) Bears but managed to keep it quiet. It was all amateur back then and if word got out he wouldn't have gone on that tour. Teammates knew nothing. I didn't even know about it. The thing is we couldn’t work out where all his money was coming from on this tour. He was always spending and we, as amateurs, were being careful with every cent. Unbeknown to us, the Bears had given him a cash advance! 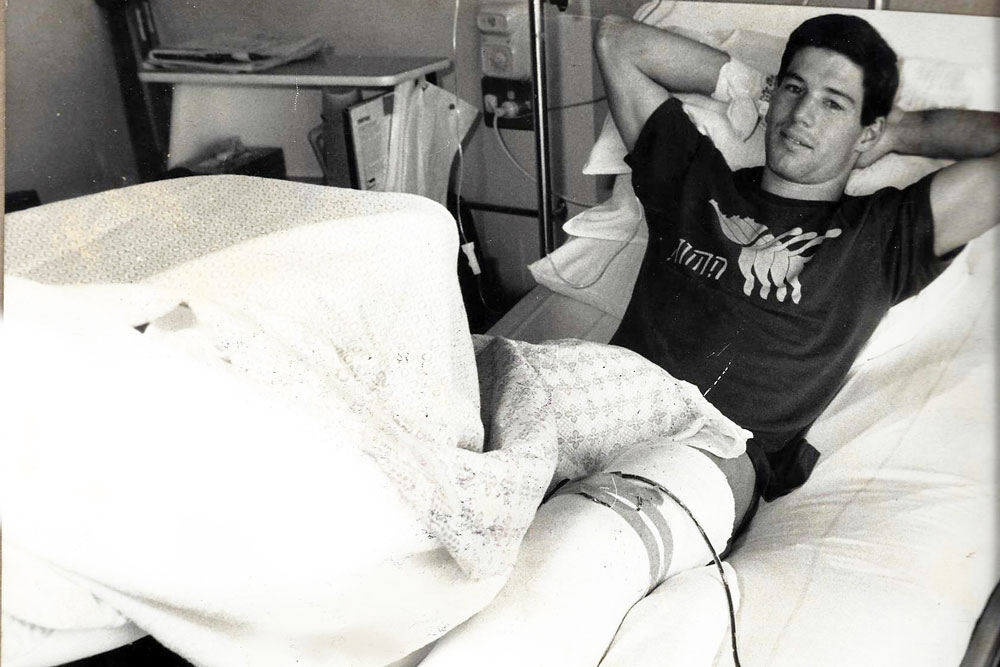 A: Fourth or fifth game in playing against Warringah, I did my posterior cruciate ligament and media ligament after. I clearly remember how I did it. We're defending our line down at the Sydney Rd end (of Manly Oval). There was five minutes to go and we'd won the game by heaps. Fitzy (Peter FitzSimons) decides to run the ball out from his goal-line and gets tackled five metres out and turns the ball over! Mark Andrews, the hooker for Warringah, comes around the side of the ruck and heads straight for the line with his body height down low. I instinctively put my leg out to stop him and he's hit me in the knee and took it out. That was it for the season. I was in a cast for six months and people were saying that was the end of my career. "Jonesy" (Manly coach Alan Jones) was ropeable with Fitzy but I didn't blame him. Good on him for trying to run the ball out. I like Fitzy….we formed a good friendship.

Q: You end up missing Manly's grand final win over Randwick that year and then had to raffle off one of your Test jumpers to pay your medical bills?

A: Jonesy started picking the right players and they got on a roll and kept it going. It was hard not being involved but I've never been bitter. It was just one of those things. They didn't have me insured for the physiotherapy for some reason. Someone suggested I raffle a jersey off to pay the bill so that's what we did.

Q: The critics weren't right – you did come back from that injury and played for Australia again in 1984?

A: I worked really hard on the knee with Greg Craig, who ended up the Australian physio, and came back to play at the start of that next year. I was picked for a Test against Fiji in Suva. I started and Nick Farr-Jones was on the bench. We won and then came the series against the All Blacks. Jonesy was the coach. We won the first Test, should have won the second by a mile but didn't, and lost the third Test by a point at the (Sydney) Cricket Ground.

Q: At the end of the year you go on the Grand Slam tour as number one halfback but Farr-Jones is nipping at your heels?

A: He is. In my second training run I did my shoulder. They picked Nick and every game he played a blinder. He was terrific. Jonesy liked him and that was it. I couldn't complain.  There was a Saturday team and a Wednesday team and everyone knew that. I was in the Wednesday team. All four Test matched we played virtually the same team and the results prove that was the right move.  It was a wonderful tour. Our last game was a Barbarians game and Jonesy rewarded a few of us by picking us for that game at Cardiff Arms Park. It was a way of saying thanks. It was a great way to finish. I always felt I was filling in for the Australian (halfback) position. There was always someone there like a Johnny Hipwell or a Nick Farr-Jones in front of me. I was just happy to be among these players and touring all round the world. I retired from international football and played club football at Manly until '92.

Q: You won the Rothmans Medal in 1985 (Sydney club rugby's best and fairest) – beating the likes of Farr-Jones and Simon Poidevin - so you obviously still had plenty of petrol in the tank?

A: My dad was a referee when he finished his career and he always said 'never have a go at the ref, shake hands after the game and say 'good game'. That must have worked! A few years later I won the Herald Medal for best and fairest, so that was nice as well.

Q: So what have you been doing in retirement?

A: I'm married with three children, who are now in their 30s, and we also have two grandchildren. I've been in the medical devices game for the last 20 years…it's been enjoyable. I play lawn bowls at pennants level. We play at Manly overlooking Manly Oval so I get to bowl and watch rugby. It's wonderful to see rugby on the northern beaches going so well. Hopefully the new bosses at Rugby Australia see fit to look after grassroots rugby. It's so vital.