Q: So Libo, where did it all start?

A: I lived on the northern beaches (of Sydney), playing for the Newport Subbies and doing a fair bit of partying. We also spent a lot of time at the Newport Arms…or the Newport TAFE as we called it (laughs).

Q: And from Subbies it was onto Shute Shield club Warringah?

A: Yes, but I went away with the Warringah guys before I joined them. My introduction was on an end-of-season tour to the US. They asked me to come and took me under their wing – on and off the field. I played just about every game on tour and then came back and started off in second grade the following season. I played one game in the seconds and that was it. I was in firsts after that. I ended up replacing "Macca" (Rod Macqueen) at breakaway. I played over 100 first grade games for them.

Q: Warringah had been around for 20 years or so when you joined but had not enjoyed premiership success. But you came close to ending the drought?

Q: Those Warringah sides you played in were feared around Sydney. You had a very tough pack of forwards?

A: Yeah we did have some very tough footballers but there was also plenty of skill throughout those sides. I am very proud of the teams I played in and an extremely proud of this current team. It was a very emotional moment when we won our first premiership (2017). I was on the hill (at North Sydney Oval) with a few ex-teammates and admit I shed a tear. I didn’t feel so emotional the next day!

Q: Back to your playing days and it was 1983 when the rep selectors came knocking on your door? 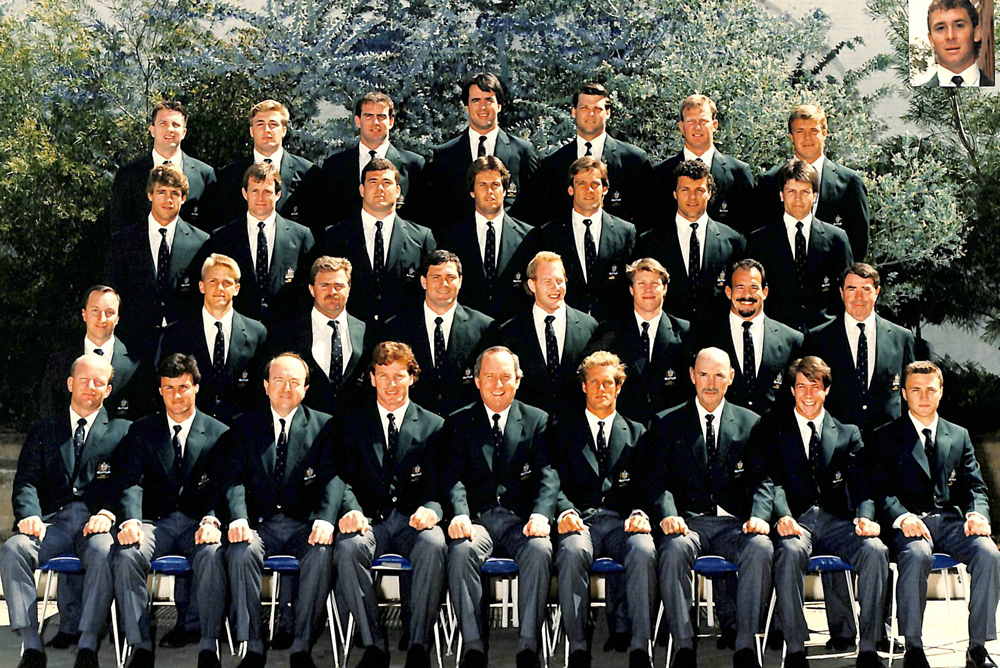 A: I got picked to play for Sydney in those old games against Combined Services at Victoria Barracks. I loved those games. They were a lot of fun. I'd always tell the boys 'it's going to be on for the first 30 minutes…these blokes will go like crazy and then skill will win us the game'. That Sydney side had a great record back then, playing all the touring sides. I've still got the old blue jumper with the anchor (emblem).

Q: From Sydney you graduated to the NSW team?

A: That's right. Back then you'd go on these five match tours of New Zealand and you'd play the top teams. But you'd also go off and play the Bay of this and the Bay of that…and they were all lunatics. They didn’t mind taking a lump of flesh home with them. I lost a bit of an ear in one game in one of those bloody places. My kids still look at my ear and go 'Jesus!' (laughs).

Q: And I believe you were sometimes picked out of position in those NSW sides?

A: Yes. I remember playing for NSW against the All Blacks and I was in the second-row with Steve Cutler. I played at the front and there was no lifting back then - it was just jump against jump. A bloke might be 6ft 6 but if he weighs two hundred ton, he ain't going to get off the ground. I won a bit of lineout ball

Q: Did you feel close to a Wallabies call-up as the mid-80s approached? 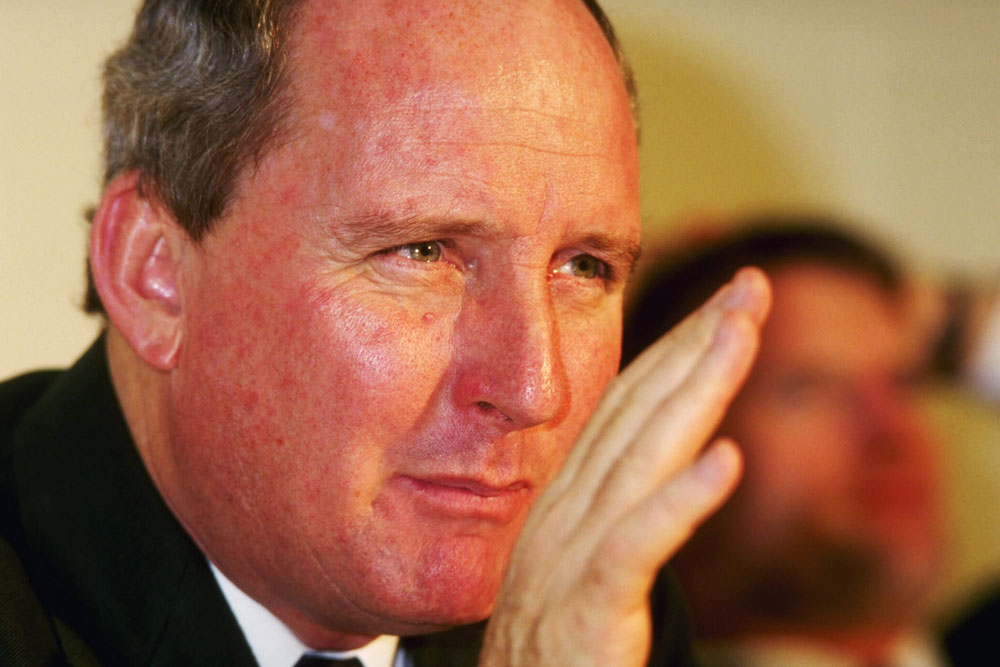 A: Alan Jones rang me a few times and I thought I was going to be on the Grand Slam tour (of 1984). He told me to get my passport ready. Then I snapped a medial ligament playing for the Australian Baa Baas. That was it for the tour. I remember I got a t-shirt printed and all I put on it was 'don't f..king ask'.

Q: It was hard for Rats players back then to get noticed. Why was that?

A: I was a boy coming from Warringah and we weren't really favoured when it came to representative honours. I came from a Subbies background. I didn’t play Colts, I didn't play Australian Schoolboys. We had some good calibre players but never really got a look in. Other clubs were looked upon more favourably.

Q: It took until 1987 – when you were 27 – for the national selectors to finally give you a shot. Tell us about that?

A: I was picked for the tour to Argentina. I played most games on tour and was picked for the first Test. I played the Wednesday game before that first Test and they marked the ground with rock lime. I slid over one of the lines and it burnt a hole in my Australian jersey. I ended up with a blister the size of a dinner plate on my back. "Jonesy" (Australian coach Alan Jones) comes to me and says 'I'm going to pick you for the first Test' and I'm like 'but I've got this giant blister'. He says 'son, do you realise what you're doing? These opportunities don't come around all the time'

Q: So you decide to play…but presumably in a lot of pain?

A: What we did was tape a pillow slip to my back and I had half an inch of Vaseline rubbed over this blister. But in the pre-match huddle when the anthems are playing, Damien Frawley's all fired up and is grabbing me under the armpits and ripping the pillow slip off singing the anthem. I'm screaming at him to stop ripping it as I try to sing the anthem before my first Test. We drew that game and I didn’t play in the second Test.

Q: Jones is replaced as national coach by Bob Dwyer, but you got off the wrong foot with him? 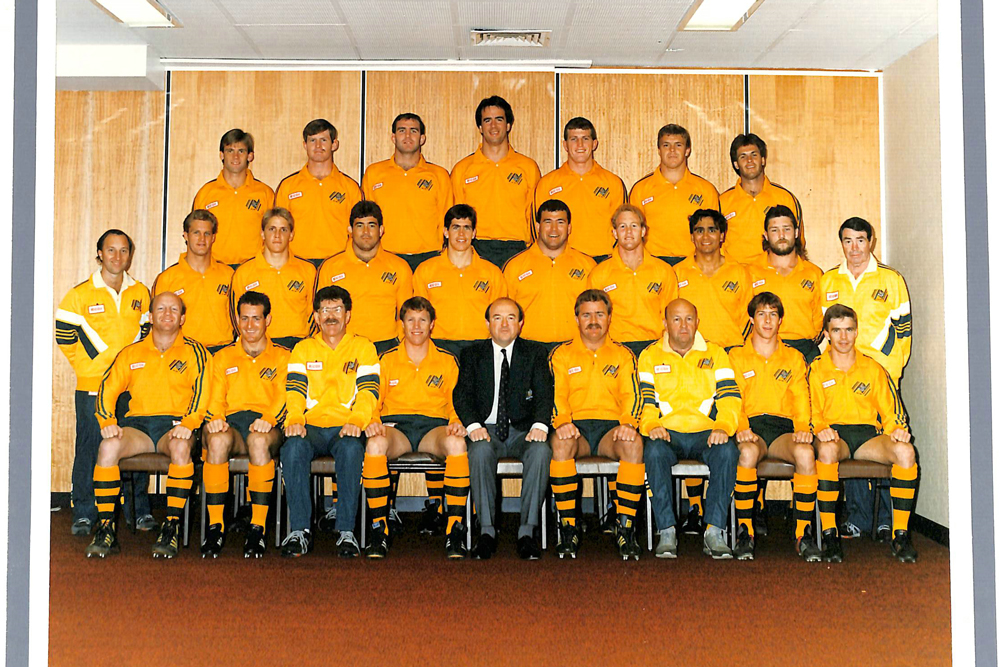 A: (Laughs). I'll never forget this. Randwick knocked us out of the preliminary final in ' 87 at Milner Field and there'd be a lot of shit go on in the game. We were in our change-room and Bob, who was Randwick coach, came in and started giving us a gobful about our tactics. I was skipper of Warringah at the time and unloaded on him. I told him to get his f..king arse out of the room before he copped a few as well. You wouldn't believe it – the next year he becomes the Australian coach (laughs).

Q: Lucky you didn’t follow through on your threat because the next year you’re back in Wallaby colours?

A: Australia lost the first Test to England up at Ballymore and he selected me for the second one and we gave them a bit of a beating (28-8) at Concord.

Q: That would be your last Test for the Wallabies. Why?

A: I'd missed a few selections over the years and I was getting a lot of offers to go and play league. I said: 'No, no. My ambition is to play for the Wallabies'. After that '88 game Dwyer sat us all down and said 'you older guys have got to look at what you're going to do'.  They had young blokes like Scott Gourley coming through and I didn’t think my chances looked that good.

Q: I believe Ricky Stuart played a major role in your switch of codes?

A: I had an offer from Frank Stanton to join Balmain but I'd struck up a good friendship with Ricky when he came over as a replacement for Nick Farr-Jones on that Argentina tour. He was about to play for Manly (in the Shute Shield) in 1988 but decided to go to the Canberra Raiders instead. He talked me into talking to "Sheensy" (Canberra coach Tim Sheens) and I ended up there in '89.

Q: Canberra goes on to win their first premiership that year but you're sidelined with a very serious injury?

A:  It's a crazy story. I was playing reserve grade against Penrith and broke my neck and didn't even know it. I'm playing prop and we won a scrum against the head, which just doesn’t happen in league, so they've reset the scrum. I've gone in as in a rugby union scrum and he (Penrith's Matt Goodwin) has stood up and the weight of my pack's come through and pushed my head down on my chest and snapped all my ligaments holding my skull onto my spine. I did my number one (C1). That's not quadriplegic – that's lights out. If I'd made another tackle, I would have been gone. Number one can stop you breathing.

Q: But at the time you had no idea of the severity?

A: We got the bus home from Penrith to Canberra and then I went to the leagues club. I couldn't lift my face off my chest because it was all locked up. I couldn't sleep that night. I couldn't even lie down. It was unbearable. I sat up all night and went to the physio the next day. He didn't want to touch me and sent me for X-rays. I spent months in Woden hospital.

Q: I guess it was one of those lucky/unlucky moments in life?

A: I think things happen for a reason. If I didn't break my neck I'd still be doing something stupid like playing Subbies at 60! I haven’t got any regrets. I won clubman-of-the-year at Canberra in 1990 – that's something I am very proud of. I met some great people in rugby and league.

Q: What are your thoughts on the current state of rugby?

A: I think money has taken away some of the passion. I was getting offered money to go to league and getting nothing from rugby, but the reason why I hung around was because I was passionate about the jersey. And don't start me on academies. Let the young blokes play against older blokes. I do think the game will have to change after what we've gone through this year. The money and sponsorship's just not going to be there. It will sort out the people who are there for the right reasons

Q: What have you been up to post-football career?

A: I've got a cleaning and security business (Millennium Services Group) I formed with a couple of mates and it's gone really well. We are in Australia and New Zealand and have nearly 5000 employees. We floated it in 2015 and it's continues to do well. I've got a lovely family (wife and three kids), so I couldn't ask for more. I've just turned 60 and life is good.